You are using an outdated browser. Please upgrade your browser to improve your experience.

Adorable sweets of famous people of the past and modern celebrities

The company "Three Star" has been manufacturing sweets for more than 25 years. Of course, sweets are undoubtedly not the most useful product to be consumed in large quantities. But do not deprive yourself of the pleasure of your favorite candy or halva. Celebrities of different generations adhere to this opinion.

Marilyn Monroe was born June 1, 1926 in Los Angeles. Few people know that the real name of the actress was Norma Jean Baker. At the very beginning of her career, the girl worked as a model and only occasionally took roles in films.

The American film actress, model, singer and sex symbol of the 1950s was skeptical, one might even say negative about diets and ate everything that brought her pleasure. Marilyn is an avid sweets lover. One of her favorite gastronomic treats was muffins, she often bought them along with cheddar cheese and strawberry jam. Nowadays, muffins and muffins are most often sold with sweet fillings: strawberry, banana, cherry, lemon, etc.

Kim Kardashian is not indifferent to sweets

Kimberly Noel Kardashian is an American reality TV star, model, businesswoman, and actress. She was born on October 21, 1980 in Los Angeles, California. Kim, the daughter of the famous lawyer Robert Kardashian and Kris Jenner, had a total of five daughters in the family.

There are disputes about the girl’s figure, someone says that this is the merit of plastic surgeons, and someone claims naturalness. Despite everything, Kim takes care of her body but does not deny herself pleasures. The celebrity's favorite sweet is churros. This is a sweet fried choux pastry. Churros originated in Spain, where they are traditionally served for breakfast to this day. They can be combined with: chocolate, caramel, condensed milk or jam.

Dear readers, do not drive yourself out of shape, at least looking at people who have achieved a lot in life, take care of themselves, do plastic surgery, even they still eat sweets, because it brings them pleasure. 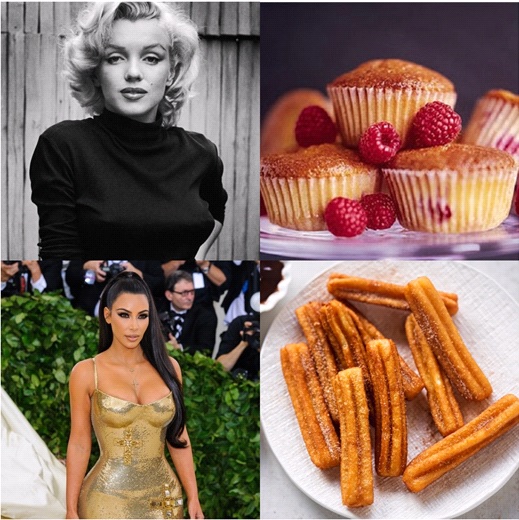